Grouper is one of the non-oil and gas export commodities that has the potential to be developed. As fish, fish consumption is much needed for restaurants and luxury hotels. The weight range of 500 - 100 grams / head, especially in living conditions, has a high price compared to in the form of dead fish.In 1999, research and development for multi-species harchery carried out jointly by the Gondol Marine Aquaculture Research Center with JICA first successfully produced mass of duck grouper seeds, cromileptes altivelis and tiger grouper seeds (Kawahara, et. Al ., 2000; Sugama et.al., 2001). Whereas to mass produce sunu grouper seeds in 2005. Technology development has been disseminated to government and private hatcheries, so that the production of duck grouper seeds has increased dramatically and more than 1 million seeds in 2001 (Kawahara and Ismi, 2003). This technology is also applied to the production of tiger grouper seeds, Ephinephelus fuscoguttatus by private hatcheries. In 2002, tiger grouper seed production was more than 2.6 million. For sunu groupers up to now, more than 0.5 million in 2006.Belawan Sicanang Village Medan Belawan District Medan City is an island surrounded by several tributaries which empties into the Deli River. 40% of the population are fishermen who are looking for shrimp or fish in the river and land pond farmers. Grouper is one of the fish that lives naturally in the waters of Belawan Sicanang Village which has high economic value. But environmental damage such as logging of mangroves due to the low alternatives of community livelihoods, changes in the function of land, continuous capture of the land causes the grouper population to continue to decline.The use of the river for floating cages in grouper aquaculture can reduce the reduced supply of groupers from the natural habitat of fishermen's catches produced by this region. Cheaper cost analysis compared to terrestrial aquaculture can improve the welfare of fishermen and support culinary commodities in the development of Mango Sicanang ecotourism which is being promoted by the community and the local government. 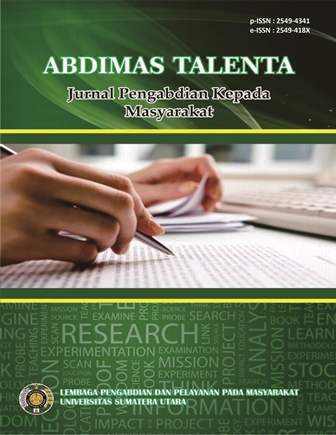 The Authors submitting a manuscript do so on the understanding that if accepted for publication, copyright of the article shall be assigned to Jurnal Abdimas TALENTA as well as TALENTA Publisher Universitas Sumatera Utara as the publisher of the journal.

Copyright encompasses exclusive rights to reproduce and deliver the article in all forms and media. The reproduction of any part of this journal, its storage in databases and its transmission by any form or media, will be allowed only with written permission from Jurnal Abdimas TALENTA. 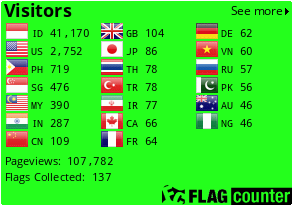