The people in Samosir believe that pigs are livestock that bring many benefits. That is why many people raise pigs. At this time there is a downward trend in pig population.This research was conducted at the people's farm in Simanindo District, Samosir Regency.   This study was conducted from May until July 2019 and aimed to investigate the factors that affect the rate of decline in the pig population. The result of research will show dominant factors that causes the rate of decline in the pig population and improvement could be conducted to prevent pig population decline trend. The method used is multiple linear regression analysis with the variable of animal feed limitations, farmer experience, long time raising, local environmental customs, religious holiday production. This research was conducted by asking the farmer directly and giving a randomly selected questionnaire. In total there were 84 pig farmers in 4 villages in each district. The results of this study indicated that the limitations of feed, long time raising, environmental customs around and religious day have a very significant influence on the decline in pig population in Simanindo District Samosir Regency. 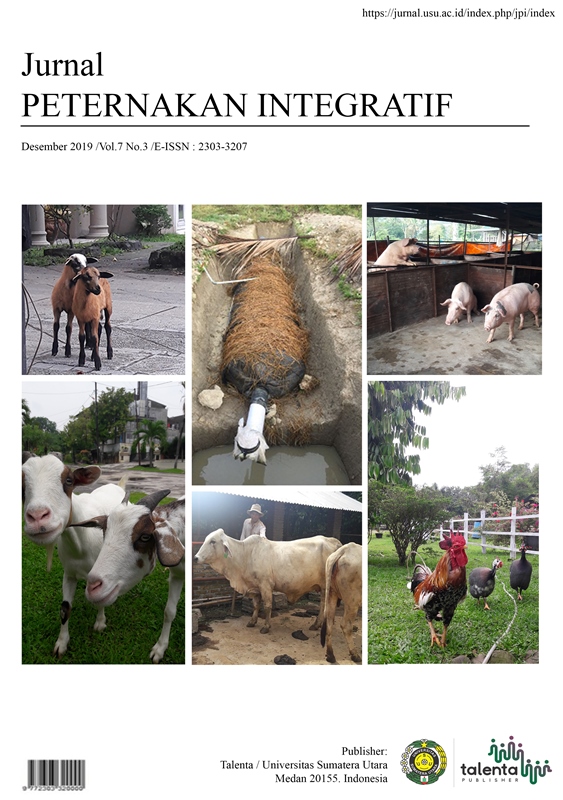 The Authors submitting a manuscript do so on the understanding that if accepted for publication, copyright of the article shall be assigned to Jurnal Peternakan Integratif as well as TALENTA Publisher Universitas Sumatera Utara as the publisher of the journal.

Copyright encompasses exclusive rights to reproduce and deliver the article in all forms and media. The reproduction of any part of this journal, its storage in databases and its transmission by any form or media, will be allowed only with written permission from Jurnal Peternakan Integratif.

This work is licensed under a Creative Commons Attribution 3.0 License.